A Lost Scene From The Lost Tribe

THE TWENTY Tens are off to a good start with the discovery of a missing sketch from The Goodies, only months after footage from another episode emerged from Down Under.

The newly recovered 30-second clip is a parody of an advert for Shredded Wheat shown at the time. Entitled “Dreaded Wheat”, the skit features a young mother seeing off her husband and son as they leave for work and school. The commercial’s jingle refers to the “men in her life”, which suddenly grows from two to a long procession of males (beginning with the milkman) running in and out of the house in fast motion.

From Out Of The Wilderness: A still from "The Lost Tribe" showing The Goodies: (L-R) Bill Oddie, Tim Brooke-Taylor, Graeme Garden.

It ends with the now slightly disheveled young mother in the front doorway, being embraced by an amorous Tim Brooke-Taylor, before the door slams shut.

The partnership of Brooke-Taylor, Bill Oddie and Graeme Garden as The Goodies, resulted in one of the BBC’s most fondly remembered sitcoms of the Seventies. Running from 1970 – 82, it saw the cash-strapped trio offering themselves for hire and getting into some hilariously ridiculous situations.

Back in October ABC researcher John Williams located a censor clip from season two’s “The Commonwealth Games“. Now he’s done it again, even finding the material at the same location – the National Archives Of Australia.

“Dreaded Wheat” comes from another season two episode, “The Lost Tribe” (tx 22/10/71), and is representative of the early years of The Goodies, which featured cutaways parodying popular adverts of the day.

“The item was compiled along with other Goodies material (including the “Commonwealth Games” cuts) and was listed by the National Archives Of Australia as being from the episode “Pollution”.

“I did not recall this piece of footage from various episodes that I had seen, including the episode “Pollution”. I sent a copy of the DVD to Andrew Pixley (BBC Archives) to review just in case there was anything on it that might not be accounted for.

“Thankfully, Andrew’s expertise has helped identify yet another missing piece of Goodies footage by checking BBC paperwork to identify the “Dreaded Wheat” clip. The episode of origin for the clip was positively identified as being “The Lost Tribe”.”

A BRIEF sketch from one of the precursors to classic comedy show The Goodies has been discovered, restoring valuable seconds’ worth of footage to an almost completely erased series.

MIND EXPANDING: A still from the title sequence of BBC sketch show Broaden Your Mind.

The 10-second colour excerpt shows Tim Brooke-Taylor seated inside a house while a voice-over provided by Graeme Garden asks, “Do you know where wasps go in the winter-time?”. Brooke-Taylor suddenly jumps up, face contorted with pain scratching at (unseen) wasps under his clothes.

The clip then concludes with a graphic featuring question marks.

The filmed clip hails from the start of series one, episode four of Broaden Your Mind (tx 11.11.68), a surreal BBC sketch show that ran to 13 episodes over two seasons between 1968 and ’69.

Sadly, almost the entirety of the series – subtitled “An Encyclopedia Of The Air” – is missing from the archives, wiped after its first broadcast. Only a few filmed inserts remain, included as an extra on Network DVD’s 2003 release The Goodies At Last, though audio copies of all episodes exist, recorded off-air by a fan at the time of original transmission.

Brooke-Taylor and Garden would go on to make fondly remembered 1970s sitcom The Goodies with Bill Oddie, who joined them for the second series of Broaden Your Mind. Guest stars for the series included Monty Python‘s Terry Jones and Michael Palin, and The Burkiss Way‘s  Jo Kendall.

The find is thanks to Australian Broadcasting Corporation researcher John Williams and comes just weeks after John revealed that he had found a missing scene from an early episode of The Goodies.

John said: “The ABC bought and ran the series between 1971 & 1973 (thanks to Andrew Pixley, Lisa Manekofsky and Alison Bean for confirming that with me). I traced the clip to a staff goof reel/Xmas reel for the year 1972, that I managed to secure by donation to the ABC archives in 2008.

“Given that the goof reels had clips from various sources on them, I thought to check the goof reels that fell into the 1971 & 1973 date range. I had a hunch that something from BYM, being a comedy, might have been included on one of the Xmas tapes seeing as they featured various spoofs and skits, as well as clips from various television comedies.

“Andrew Pixley (the noted Doctor Who historian) confirms that the b&w clip is the ‘opening filmed gag from Broaden Your Mind show 1/4, which is in fact a piece missing from the existing soundtrack’. As ever, TBT makes physical humour look deceptively easy.”

The BBC has been notified of the clip’s existence and plans are under way to return the footage to the UK, hopefully in time for the British Film Institute’s forthcoming Missing Believed Wiped event, to be held in January 2010.

Here are some rare clips from Broaden Your Mind:

The near-legendary ‘Sex Test’ scene from season two’s “Commonwealth Games” (aka “Sporting Goodies”), tx 8/10/71, features a group of geriatric, bowler-hatted politicians lining up in front of a sexy young woman’s bedroom for one-to-one examinations of a very personal kind!

It forms part of a greater storyline where The Goodies – Tim Brooke-Taylor, Bill Oddie and Graeme Garden – are asked to train the British Commonwealth athletic team for the next Commonwealth games. Being wholly comprise of superannuated MPs , the team fails its training tests and is replaced by the super chaps three.

The black and white 1″ VT, which lasts for approximately 40 seconds, was located in the National Archives Of Australia by ABC researcher John Williams.

John, who has previously uncovered missing footage from such shows as At Last! The 1948 Show, says he first became aware there was missing material from the archived episode of “Commonwealth Games” after visiting the Goodies Rule OK website.

He explained: “I am indebted to the Goodies Rule OK site for alerting me to the fact that the only surviving copy of this episode (the BBC had wiped the original tapes) had been returned to the BBC by the ABC some years later, and that there was a segment cut from this story.

“This episode was cut for the family afternoon/early evening viewing time-slot that the Goodies occupied in Australia for many years on ABC TV.

“The physical cut material was sent to the Censorship Board, much akin to the Doctor Who censor clips recovered in Australia by Damian Shanahan  that eventually made its way to the NAA (a repository for Government records, military records, photographs, and ex-censor’s material). It was a legal requirement to deposit cut material (from movies/TV) with the Censorship Board.

He continued: “This surviving copy of “Commonwealth Games” has a pretty drastic looking cut. It got me thinking about the possibility of the missing ‘rude bits’ from this episode being held at the National Archives!

“After some searching for any material relating to The Goodies at the NAA, I narrowed the search down to a few compilations and amazingly the cut footage was on the first compile that I looked at! 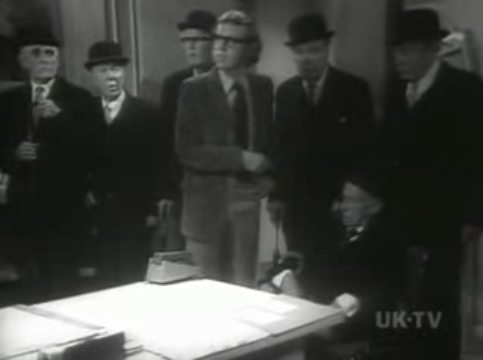 “The material shows a queue of bowler-hatted, elderly politicians lined up outside a bedroom (curiously situated in part of the British Minister For Sport’s office – the minister being played by Reginald Marsh). The minister’s secretary (dressed in a revealing negligee) invites the politicians into a chroma-key/CSO bedroom; sometime later, the secretary gives a whispered report to the minister about the ‘performance’ of the geriatric pollies, then infers that she had also tested the performance of the Goodies.. an indignant Minister then mutters “And I didn’t even get a cup of tea this morning!”

“It’s a great thrill to find this footage, let’s hope it sparks some further DVD releases.”

According to Goodies Rule OK, Tim and Graeme spoke about the discovery during an interview on 702 ABC radio. The footage was given its first public screening in over 30 years during Sydney’s World’s Funniest Island festival, held last weekend.

The website has temporarily uploaded a copy of the radio interview, which can be found here.

THIS website has proven instrumental in helping previously missing TV material find its way back to the archives for all to enjoy.

Back in April, Wiped ran a feature – John Williams On Finding Flashez – looking at the recovery of footage from influential Australian music show Flashez, which ran from 1976-7 on ABC (Australian Broadcasting Corporation).

Despite running five days a week, Flashez was shockingly represented in the archives, with no whole episodes being known to exist until researcher John took up the cause in 2006.

Two months after the publication of the feature, in June, Wiped was contacted by former Flashez producer Ralph Montague, who explained that he had in his possession an old tape with a copy of his last show on it, which he was happy to donate in return for a DVD copy.

Wiped promptly notified ABC’s John Williams and put him in touch with Mr Montague, who agreed to send an excited John the tape.

John takes up the story: “Ralph Montague sent me a Betamax tape, the box marked ‘Flashez segs’,  that had not been viewed in decades.

“I managed to finally track down an antique Betamax player within the ABC TV offices. I put the tape into the player and hoped for the best; after all, there was no guarantee that the tape would even play, let alone have any Flashez material on it.

“Thankfully, the iconic opening titles for Flashez appeared and amazingly the picture quality had held up quite well, despite the passing of time, with little tape damage or picture/audio deterioration (drop-outs and tracking problems are infrequent). All of this material was missing from the ABC’s collection.

“I checked some ‘ready for transmission’ documents in ABC Document Archives and have traced episode information for what has survived on Mr Montague’s tape. Here is what was on the tape:

Live studio interview with Red Symons. Symons is currently a television personality in Australia (Australia’s Got Talent), as well as a former member of one of Australia’s most popular and influential bands of the 1970s, Skyhooks. This is a rare 1970s post-Skyhooks interview for Symons.

Feature story: “Magical Mystery Tour” – a feature re: travel options in Australia for younger travellers (part two of an ongoing series re: travel)

We have about 90% of this episode in its entirety barring some crash recording over a music revue segment.

Live Studio interview with drag racer John Fleming, conducted by Kate Fitzpatrick. Rare, as this is the only surviving in studio/live material of Kate Fitzpatrick (an acclaimed and prominent Australian actor) that we have. The ever-versatile Kate had a stint as a reporter on Flashez.

A number of story and segment introductions for this episode by Flashez host Ray Burgess are also on this recording.

John continued: “We are indebted to Mr Montague for donating the material to the ABC and also grateful to this site for bringing the existence of this material to our attention. The power of the Internet in being a tool to help recover lost television material cannot be underestimated.

“Thanks to Wiped for helping recover some of our television history.”