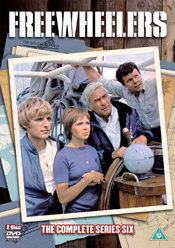 All 13 episodes from the sixth season of the  fondly remembered UK children’s spy adventure series, described by website http://www.televisionheaven.co.uk as an ‘adrenalin-charged 30 minute actioneer… that featured all the gadgets of a decent Bond movie minus the sex and sadism’.