ROD STEWART’S film archive has survived remarkably well compared to other artists, mostly thanks to infrequent television appearances.  In fact with the exception of seven Top Of The Pops performances, everything of note broadcast in the UK from mid-1973 onwards survives intact. 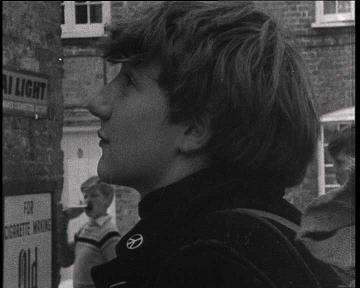 As for the sixties, all that has ever come to light has been poor quality footage of Steampacket at the 1965 Richmond Jazz Festival and what appears to be home movie footage of the Jeff Beck Group at the Fillmore East in New York dubbed with ‘Shapes Of Things’. Around a decade ago a short Swedish film of the Jeff Beck Group in the recording studio with Mickie Most and featuring great footage of ‘Plynth’ was discovered. And that’s it!

Rod Stewart’s most significant sixties television appearance was a 30-minute documentary titled ‘An Easter With Rod’ (otherwise known as ‘Rod The Mod’), produced by Francis Megahy and Fred Burnley. This was sold as “a portrait of a typical mod” and screened on 2 November 1965.

There has never been any serious hope of finding this film which had been assumed to have been wiped.  Last week that assumption changed when the BBC announced they had found this documentary at the British Film Institute (BFI) in “bits and pieces”.

I had always suspected ‘An Easter With Rod’ still existed due to a quote from Geoff Wright (one of Rod’s early managers) in George Tremlett’s 1976 paperback The Rod Stewart Story:

“He would turn down any idea that he thought was ‘pop’ rather than ‘blues’. That was something he repeated again when he was interviewed in that film ‘Rod The Mod’, which is an interesting film to see now because many of the opinions he expressed then he has flatly contradicted in his later career.”

But when Long John Baldry spoke to Smiler magazine in 1993 hopes faded when in response to a question about concerts being filmed, he said:

“There was a documentary, but maybe Rod has put pressure on for it to be destroyed. It was a show called ‘Rod The Mod’. It showed us travelling round all these places in a vile van we had which was a Bovril cattle van. I’d bought it for £40 and had it converted. Our heating device was actually a Kerosene Stove secured with ropes!

“Lord knows what would have happened if we had collided with anything, we’d have all gone up in smoke! The film was a history of us going hither and hither, going up to Stoke on Trent and places like that. The crew were there all the time. It was a black and white thing and I know that when it was broadcast it was called ‘Rod The Mod’ because it was built around Rod. It was very interesting but it’s never seen the light of day since.”

‘An Easter With Rod’ has been sought many times over the years by numerous writers of books and producers of television documentaries but no one ever managed to locate it. The most recent search was three years ago by Andy Neill, author of the excellent Faces biography ‘Had Me A Real Good Time’. Andy is a thorough and meticulous researcher and it was fair to assume that if he could not locate it, then it did not exist.

The discovery of ‘An Easter With Rod’ is one of the most significant musical finds ever of swinging sixties London – not just for Rod Stewart fans, but as a visual documentation of the R&B scene that was emerging, the fashions and attitudes and for unique footage of London architecture that has long disappeared – most notably the newsagent’s run by Rod’s parents that he grew up above.

David Bowie’s lost Top Of The Pops clip made the national news and was the subject of newspaper articles and huge interest on internet forums – and quite rightly too.  Whereas, so far, the reaction to this equally significant find has been luke warm at best.

On 9 July a BBC Rod Stewart documentary used around 10 minutes of footage out of the 30-minutes that was originally broadcast in 1965. The film deserves to be lovingly re-assembled and broadcast in full. This is musical history in the making featuring one of the biggest singers the World has ever seen.

If, like me, you believe this important piece of musical and cultural social history deserves to be re-assembled and broadcast in full please join our campaign to make it happen.

Please email the BBC in your own words telling them how much you enjoyed Tuesday’s documentary and how much you would like to see the full Rod The Mod sixties documentary in its entirety. And don’t settle for a standard reply!

You can also join our forthcoming ‘Rod The Mod’ Facebook campaign to be announced shortly at www.rodstewartfanclub.com